From Budapest to Prague, July 2011

We were excited to arrive in Budapest, despite the late hour, and arriving at the Intercontinental Hotel on the banks of the Danube, it was wonderful to look across the river to see the Fisherman’s Bastion and Mattias church, so nicely framed in the glowing lights. Our cruise featured 2 nights pre cruise in the glorious city, followed by 3 nights in Prague post cruise. 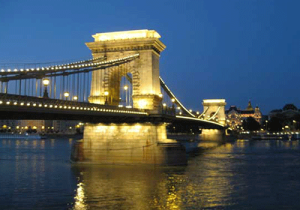 Budapest is Hungary’s lively capital. Budapest straddles both banks of the Danube, with seven bridges, including the famous Chain and Elizabeth Bridges, connecting ancient Buda on the right bank with Pest on the left. The massive hilltop castle complex with the Fishermen’s Bastion and the Mattias Church. Many stores sold embroidery,  porcelain and paprika. The complementary breakfast at the hotel featured abundant choices and the staff was well trained and attentive. This was followed by a 3 hour tour of the city to enjoy the beautifully restored architecture and the Parliament buildings, which were modelled after the Westminster parliament. The afternoon was free time which allowed us to explore on our own, and we visited St. Stephen’s Church, The Opera House, Heroes’ Square, The Royal Palace, the bridges and more. After dinner we walked over the Chain Bridge and returned across the Elizabeth Bridge. The river walk is a safe and enjoyable stroll in the evening.
After breakfast on our final day, we enjoyed free time until the smooth and quick transition to the ship. Which sailed at 5:30. The temperature was approx 30C and we had a full 6 course dinner with lots of wine at 7 p.m. We could see instantly the high standards of food preparation & presentation and the commitment of the staff to ensure that all passengers were provided with a personalised level of service. This would be the standard for the entire cruise, of course.
The next day was spent cruising the Danube, relaxing and marvelling at the scenery on both side. Hungary was on our left and Slovakia on our right. The two countries share the Danube for a 58 mile stretch, the border being in the middle of the river. From our ship, we saw Bratislava, the capital of Slovakia. Vienna, Austria’s capital (one of nine states, smallest in area, largest in population) is known as “The City of Music” and inspired the creative genius of Mozart, Beethoven and Strauss.
We arrived in Vienna, had an early dinner and went off to see “The Walz Concert & Ballet Dance Performance” and were served champagne during the intermission. We enjoyed another full breakfast buffet before boarding the bus for a city tour of Vienna. Some of the highlights Hofburg Palace, Stephansdom, Maria-Theresa Platz, Karlsplatz (Baroque Karl’s Church) Prater park (Vienna’s largest amusement park with a giant ferries (wheel

[212 feet high]) We enjoyed a light lunch and did more sightseeing (stayed in the city) while the rest went back to the ship for lunch. We met the bus at 1:30 for an optional tour of the Schonbrunn Imperial Castle & Imperial Bakery. This Palace housed exceptional furniture, paintings and treasures and it was the only great castle which has never been sacked. The romantic tour of the imperial apartments took us on a journey through the centuries which started behind a massive door at the top of the Blue Staircase. It began in the west wing of the palace, with the apartments of Emperor Franz Joseph and his wife, Elisabeth, which are furnished in 19th-century style, and continued through the state rooms in the central wing. From there the tour proceeded to the richly-appointed apartments once occupied by Maria Theresa. The Franz Karl Apartments, which were occupied by Emperor Franz Joseph’s parents, Archduchess Sophie and Archduke Franz Karl, conclude the tour.

We enjoyed a walk to the acres of gardens before proceeding to the bakery where they demonstrated the making of the popular Viennese speciality of Apple Strudel. We enjoyed some apple strudel and left with the recipe.
One of the joys of river cruising is waking up to find yourself in a medieval village that you had never anticipated. For me, this was Durstein, known for the magnificent baroque Stiftskirche with its blue façade, in the heart of the Wachau wine region. Above the town are the ruins of the castle where England’s King Richard the Lionheart was imprisoned in 1192. After lunch we sailed through the Wachau Valley, arriving at Melk where we enjoyed a tour through Melk Abbey, which dominates the town and is one of Europe’s largest monasteries.
Salzburg/Cesky Krumlov / Passau.
This was a busy day for everyone, with 23 of us choosing to visit Cesky Krumlov, and 40 selecting the tour to Salzburg & the Sound of Music. Chesky Krumlov is a small city in the South Bohemian Region of the Czech Republic, best known for the fine architecture and art of the historic old town and art of the historic old town and Ceský Krumlov Castle. Old Ceský Krumlov is a UNESCO World Heritage Site and was given this status along with the historic Prague castle district. Most of the architecture of the old town and castle dates from the 14th through 17th centuries; the town’s structures are mostly in Gothic, Renaissance, and Baroque styles. The core of the old town is within a horseshoe bend of the river, with the old Latrán neighbourhood and castle on the other side of the Vltava. During the Communist era of Czechoslovakia, Krumlov fell into disrepair, but since the Velvet Revolution of 1989 much of the town’s former beauty has been restored, and it is now a major holiday destination popular with tourists from Germany, Austria, and beyond. In August, 2002, the town suffered from damage in the great flood of the Vltava River. After the return bus ride we joined the ship in Passau, Germany.
After a quick tour through this town as we were back at the ship for dinner and set sail for Regensburg, enjoying another wonderful dinner and 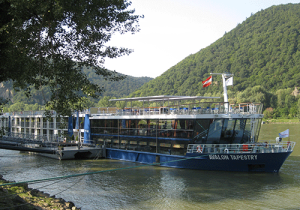 lots of wine. After dinner we enjoyed a concert given by Giorgio with his electric violin. We then danced with the music of Zarko. After breakfast we left on a city tour (one & a half hours) with a male local guide that worked for the city and had a master’s in history. Regensburg is one of Germany’s best preserved medieval cities. Visited St. Peter’s Catheral plus many more old building including the old salt house. We decided to partake in the complimentary sausage and beer in mid afternoon, and I can say that I have never enjoyed a sausage as those in Regensberg. We walked over the Steinerne (stone) Bridge. This miracle of medieval engineering is one of Europe’s earliest intact stone bridges consisting of 16 arches (built 1135 & 1146). Next to the bridge, on the city side of the river, a former salt warehouse has been converted into a cafe. We sailed in the late afternoon for Nuremberg.
Approaching Nuremberg, we had a presentation up on the sky deck from Stefan Hoffmann about the locks and the inter-continental water line. Very interesting! We had gone through 23 locks (most of these we went up) and crossed the continental divide. We then enjoyed a Bavarian Buffet lunch before we went on our city tour as well as our optional tour for the Nazi Rally Grounds and the Palace of Justice.Another great city tour by an excellent tour guide. The Nazi Party Rally Grounds in Nuremberg covers eleven square km. Since 2001, the Documentation Centre Nazi Party Grounds has existed in the unfinished Congress hall, originally planned to house 50,000 people. One could spend days going through this building. The trial of “Major War Criminals” began in the jury courtroom of the Nuremberg Palace of justice on Nov. 20, 1945. At this trial, 21 leading figures of the Nazi regime had to answer for crimes against peace and humanity before the international court. 12 additional trials were held before US military tribunals in the years from 1946 to 1949. An afternoon walking tour of the old town centre and the palace gave a very favourable impression of the medieval walled town. Nuremberg is another charming surprise.
Breakfast on our final day was followed with boarding the bus by 8:30 for our four hour trip to Prague. Our rooms at The Hilton were ready when we arrived. At 2:00 we went on an optional tour “Prague’s Secrets Revealed”. The following morning we had a city bus tour. We had the same guide with great speakers. Thurs afternoon and Friday we strolled through the city. Prague, a medieval silver mining community, was the second-wealthiest town in the Kingdom of Bohemia. The town’s former wealth is still reflected in the diversity of its architectural treasures and in the structure of the city. It is a large city and you could spend days touring the exquisite architecture. Prague was four cities each totally enclosed with tall stone walls. Today there is no evidence of these walls.  The Charles bridge was built in 1357 by Charles IV. It is the oldest bridge in Prague and features 30 baroque statues – mostly from the 18th century. The construction consists of 16 arches and the bridge was fortified at both ends with a tower. We walked this bridge 4 times.We toured the castle, which was established in the 9th century, and the 12th century Romanesque palace. In 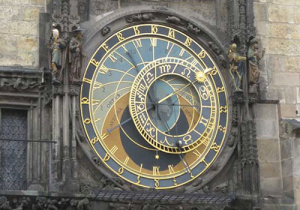 the 14th century, under the reign of Charles 1V, it was rebuilt in the Gothic style, and had more reconstruction in the 15th & 16th century.
No visit to Prague is complete without a visit to the astronomical clock, where people gather each hour to view the unique display that takes place.The town hall was built in 1338, and in 1364 the adjoining tower and chapel were added. The horologe is from the beginning of the 15th century, in the upper part each hour (9-9) the procession of the 12 apostles in succession appears at the window, in the lower part is a copy of 12 internal medallions with the signs of the zodiac by Josf Manes. Do not miss this unique experience.
As we know, all good things do come to an end, but we left this wonderful 12 day trip with memories to share, and looking forward to next year’s cruise in France!

Brian Connor has been a travel professional since 1995, and is an expert on Europe. Learn more about Brian here.