Dine with good friends at a Michelin 3 star restaurant…..anywhere!

My experience was at the Maison Pic in Valence which is south of Lyon. 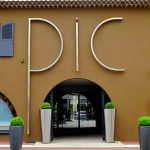 To moderately control cost go for lunch look for a location in a smaller centre considered off the “non-French” tourist map. 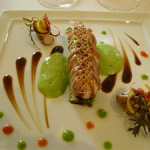 But be prepared for +200 euros per person for the prix fix menu, wine and a cheese course.

It is about one kilometre (0.6 miles) off the Normandy (some argue Brittany’s) coast, at the mouth of the Couesnon River near Avranches. Since the 8th century AD it has been the seat of its name sake monastery. The structure of the town exemplifies feudal society: on top, God, the abbey and monastery; below, the great halls; then stores and housing; and at the bottom, outside the walls, houses for fishermen and farmers.
Its unique position made it accessible at low tide but defensible as an incoming tide stranded, drove off, or drowned, would-be assailants. The tides can vary greatly, at roughly 14 metres (46 ft) between high and low water marks. Popularly nicknamed “St. Michael in peril of the sea” by medieval pilgrims making their way across the flats, the mount can still pose dangers for visitors who avoid the causeway and attempt the hazardous walk across the sands from the neighbouring coast.

The local salt marsh meadows are ideally suited to grazing sheep. The wellflavoured meat that results from the diet of the sheep in the pré salé (salt meadow) makes agneau de pré-salé (salt meadow lamb) a local specialty that may be found on the menus of local restaurants.
La Mère Poulard was opened in 1888 by Annette and Victor Poulard, just inside the main gate of Mont SaintMichel. You can still stay here, inside the walls, but it was and is the secret recipe for her

omelette which made a name for La Mère Poulard around the world. To comfort her guests after a long, often difficult journey, Annette kept the fire in the large fireplace alight at all times and made her famous soufflée omelette over an open fire.

Martin Walker and his “hero’ is Bruno Courreges, Chief of Police in Saint-Denis: BORDEAUX AND PERIGORDE