FEATURED OFFER
Join us for a fantastic expedition cruise to the Falklands, untouched South Georgia and experience a total Solar Eclipse from the South Orkney Islands before our ultimate exploration of Antarctica. 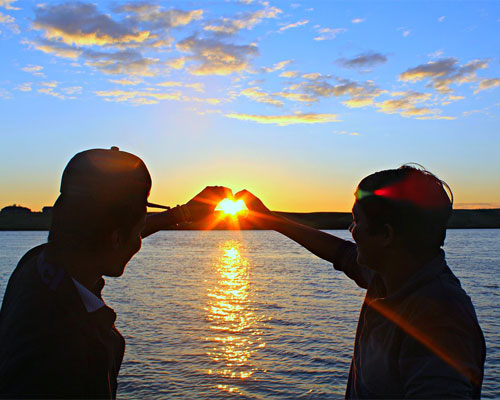 FEATURED OFFER
Sail in the wake of the great explorers to experience the Chilean fjords, majestic Antarctica and experience a total Solar Eclipse from the South Orkney Islands before heading to the Falkland Islands.

A total Solar Eclipse is when the moon covers the sun completely for a few minutes. Day suddenly becomes almost as dark as night and the temperature drops noticeably. Birds flying near the ship may also fall eerily silent, as if holding their breaths while the moment passes.

There are a number of features to look out for when studying a total Solar Eclipse by eye, including the red rim, or chromosphere, while the sun is covered, as well as the coronal flare at the top of the sun.

This eclipse will also be a little unusual as the path of the total eclipse will move from east to west, which is the opposite direction to most other eclipses and a feature unique to observing it in the polar regions.

Should weather prevent us from observing the eclipse directly, you will still be able to experience a distinct moment of darkness for the duration of the eclipse. It will seem as if the whole world has stood still in reverence of this phenomenon. These are moments that you’ll never forget.

For 2021, the total Solar Eclipse will only be observable around Antarctica. We will experience it in the Scotia Sea near the South Orkney Islands, a group of four islands about 600 km (just over 370 miles) northeast of the Antarctic Peninsula. Early morning in the South Orkney Islands during its summer season means the sun will be hanging low on the horizon, having barely set during the night. Provided skies are clear, we will be able to observe the eclipse from beginning to end, lasting just under two minutes.

After observing the Solar Eclipse, we may explore the South Orkney Islands themselves. 85% of the islands’ surface is made up of glaciers, which makes them the perfect habitat for various species of penguins and seals.

The decks of expedition ships MS Fram or MS Roald Amundsen, which are positioned in the waters near the South Orkney Islands, are the ideal place for front-row seats to the upcoming total Solar Eclipse.

As part of your cruise with us:

Hurtigruten assumes no responsibility or liability for weather conditions, such as clouds or fog, during the solar eclipse which may reduce or obstruct the viewing conditions. Actual landscapes, views and weather conditions may vary due to date, time of day and other variables.

Please contact your travel professional at this agency for more details on this offer.
This agency reserves the right to correct any errors, omissions or inaccuracies in this publication at any time without notice.